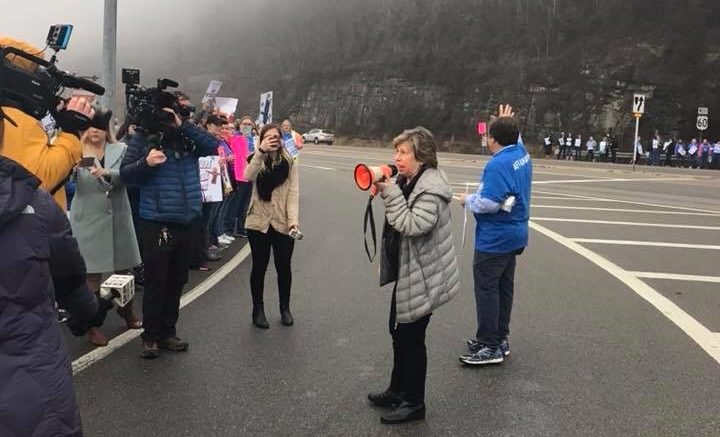 “There is a level of engagement that I haven’t seen before. People are woke,” said American Federation of Teachers President Randi Weingarten when we spoke late Saturday night.

Weingarten’s call to action came as the leader of 1.5 million-member AFT was wrapping up a whirlwind week of organizing.

Earlier in the week, Weingarten pushed back against calls from President Trump to arm teachers. In response to Trump’s message, she has attempted to rally allies of organized labor to the cause of gun control, believing it a subject that many in the labor movement have neglected.

At the same time, teachers in 55 counties in West Virginia have been involved in the historic statewide teachers strike in West Virginia, drawing national attention to their poverty-line wages and skyrocketing health care costs.

The strike came as the Supreme Court is set to hear the precedent-setting Janus case, which could mandate “right-to-work” laws for the entire public sector workforce.  If that is indeed how the court decides, the labor movement will find itself deprived of tens of thousands of dues-paying members.

“Whether it’s the teachers in West Virginia or the kids in Parkland, people are organizing. You saw it with the women’s marches last year and now, with the strikes and protests this year, there is a developing sense that we need the power in our hands to change this,” said Weingarten. “We can’t keep outsourcing this power to others. There is a recognition that if we want things changed, we have to do it ourselves.”

Weingarten sees a ray of hope in the resistance of the teachers, who despite lacking collective bargaining rights are still forging ahead with their strike. A decade earlier, Weingarten found her union on the defensive as Democrats in the charter schools movement took aim at teachers unions.

However, in the last decade, AFT has gained 250,000 new members, with major increases in higher education and among charter school teachers. More than that, Weingarten said she has witnessed a new militancy among teachers that are willing to push back against administrators and politicians.

The strike was only expected to last for two days. However, enthusiasm was so high that the teachers have voted to extend their strike into the second week. As long as support for the strikers remains strong, the strike is expected to continue indefinitely until the state legislature passes the pay raises and improvements to the state’s health insurance plan demanded by the two teachers unions.

Already, West Virginia Attorney General Patrick Morrisey has threatened to seek an injunction against the teachers if the strike continues.

“Let us make no mistake. The impending work stoppage is unlawful,” Morrissey said in a statement last week. “Our office is prepared to support any relevant state agency or board with legal remedies they may choose to pursue to uphold the law.”

Weingarten said that if the state seeks an injunction against striking teachers from her union, the AFT is prepared to fight them in court.  She added that win-or-lose, strikes like the teachers strike in West Virginia, where collective bargaining for public employees is banned, are showing that the AFT still has the grassroots energy needed to bring about change.

“There is a determination and tenacity and a refusal to give up and I think that’s transformative in the post-Janus era,” said Weingarten as we concluded our late-night conversation.

Be the first to comment on "Exclusive: AFT Prez Weingarten Says She’ll Go To Court to Stop Injunction Against W.V. Teachers Strike"