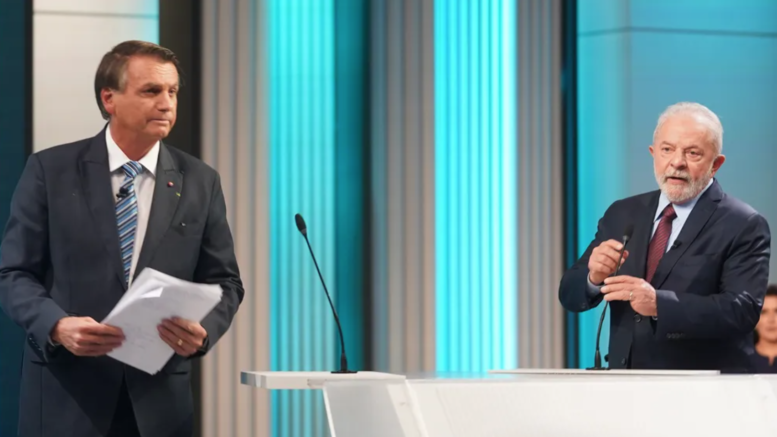 Lula was widely seen as the win of the last Presidential debate against Bolsonaro (Imagem: Marcos Serra Lima/ g1)

Greetings from Rua de Primeiro de Maio in Santo André, Brasil, a street that celebrates May Day in an industrial city of about 700,000 and a hotbed of support for Lula.

Ahead of Sunday’s union election, I’ve had a busy day visiting with the tire workers union, the hotel workers union and some of the leaders of the biggest trade union syndicates in Brasil.

We will have a full story on Sunday sharing their thoughts.

Payday Report has set up temporary headquarters across the street from the city’s Justiçia do Trabalho in Santo André, which translates to “labor court” in English.

Santo André is part of a series of cities encompassing Sáo Bernardo do Campo, Santo André and Sáo Caetano do Sol. The 2.5-million-person urban metropolis region surrounding these three cities and other mid-sized industrial cities is known as the ABC.

Many have labeled the ABC as the Detroit of Brasil because of the auto industry’s heavy presence here as well as union members employed in those cities.

Traditionally, these industrial cities outside of Sáo Paulo have been a hotbed of union support for Lula who got his start as a union leader in Sáo Bernardo do Campo, 20 minutes from Santo André. The ABC will certainly be an interesting hotbed of union activity over the next few days and Payday will be here to cover it.

Datafolha Poll: Lula leading 50% to 36% Over Bolsonaro
With election day set for Sunday, a new poll by Datafloha shows that Lula is leading Bolsonaro by a margin of 14 points.

According to the poll, 50% of people who intend to vote plan to vote for Lula versus 36% for Bolsonaro. The poll was taken before a live televised presidential debate last night in which Lula performed well and Bolsonaro found himself constantly on the defensive.

If Lula achieves 50%+1, he could avoid a runoff. A big victory by Lula could also help the Workers Party and the allied parties in down-ballot races to achieve a governing coalition in Congress.

The Workers Party, which Lula leads, has never won the governorship in Brasil’s largest state, Sáo Paulo. The state of Sáo Paulo encompasses 21% of the total population of Brasil, with over 46 million residents. Now, though, Workers Party candidate Fernando Haddad has consistently led the polls in Sáo by more than 10% .

Donate to Help Us Cover this Crucial Race

The last two days in Brasil have been very exciting. I spent several days in DC reporting, took a red-eye flight to Sáo Paulo, and have been working ever since.

Thanks to our readers, we’ve been able to afford taxis to travel around the city and have even taken our Brazilian guides in Santo André out for dinner.

Donate to help us cover the costs of our trip in Brasil. Please, if you can, sign up as one of our 726 recurring donors today.

Alright folks, we gotta run to interview some trade union leaders in Brasil. We will have more news on Sunday on what’s happening with the election.

If you can, chip in to help us over this crucial race in Brasil. Or, sign up as one of our 726 recurring donors today.

Keep sending ideas, suggestions, story ideas, links,  and comments to [email protected]. Thanks again for all the support.