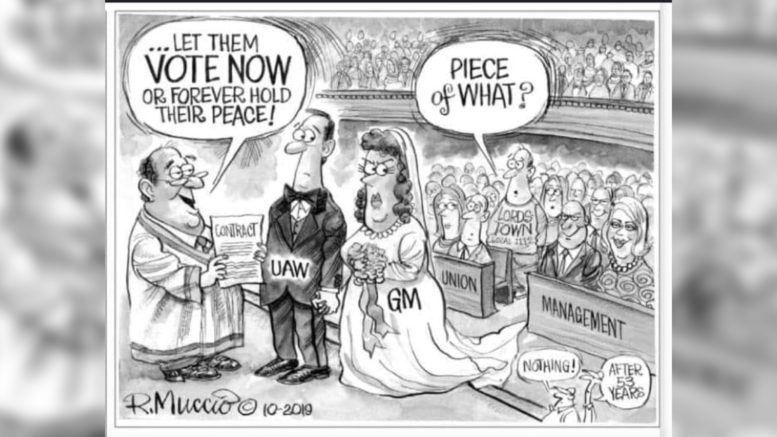 Today, after its 10th day on strike, the 20,000-member strong Chicago Teachers’ Union announced that they had reached a “monumental agreement” with the Chicago Public Schools. The union is currently presenting the deal to the 700-member House of Delegates with a motion to suspend their strike.

Unlike the UAW, which passed its tentative agreement with only 57%, the CTU has run a far more transparent and democratic process; convening their 700-member House of Delegates multiple times to keep communication about their  Some say part of the reason is that the CTU employs an open-bargaining approach taken by the Chicago Teachers Union.

They know what their members will support and won’t support because their members are regularly informed of what the CTU is facing at the table. Moreover, many supporters of the CTU argue that their open bargaining approach also allows them to apply additional media pressure on management.

CTU adopted the open bargaining approach after going through a democratic rank-and-file revival in the early 2010s; They kicked out incumbent leadership that had agreed to concessionary contrast and taking a more aggressive direction. The union went on strikes in both 2012 and in 2019 after having not gone on strike since 1987.

In sharp contrast to the Chicago Teachers’ Union, the UAW, which has seen 6 of its top leaders convicted of union corruption charges, negotiated mainly in secret.

Over a five-week period, the UAW released releasing only eight updates, none of which included language on contract proposals being presented by the company or the UAW at the bargaining table.

UAW Vice President for GM Terry Dittles repeatedly insisted that he would not negotiate with the company in the press. The UAW was tight-lipped, not even leaking details of contract talks to union-friendly labor reporters.

In contrast, General Motors did leak details to business friendly-reporters in the Detroit Free-Press and the financial press.

Their selective leaks often made General Motors look more generous at the bargaining table than they were. Various outlets repeated G.M. was offering a pathway to permanent status for temporary employees without mentioning the massive legal loopholes G.M. was also proposing.

Their reporting also claimed that G.M. had proposed to re-open several plants such as Lordstown, which G.M. later declined to do.

The leaks outraged the UAW, which traditionally had engaged in closed-door bargaining with General Motors. Still, the leaks did the trick: convincing many members that the UAW was being offered a much better deal than what was actually on the table.

With very little information on bargaining being provided by top union leaders, union members that I interviewed relied largely on misinformation that had been leaked by General Motors.

“By not talking to the press, the UAW allowed us to be isolated from our members,” said one veteran UAW leader, who requested anonymity out of fear of retaliation from top UAW leadership. “If the UAW had been more transparent, we could have rallied public support behind key demands. Instead, they let G.M. define the narrative.”

When the tentative agreement was announced, many labor supporters celebrated without even knowing the details of the contract.

“I’ve never felt prouder to be a union member. Backed by millions of brothers, sisters, and friends across the country, UAW members stood together to win the fair treatment that they’ve earned over years of selfless sacrifice,” said AFL-CIO President Richard Trumka shortly after the news of a proposed tentative agreement was announced.

After the contract was released, a very different picture of the deal emerged with the New York Times declaring that General Motors had won a long-sought prize following the 39-day United Auto Workers strike.

“G.M. won something that it had rarely attained in the past outside of bankruptcy: the ability to close three plants economically,” wrote the Times’ Neal E. Boudette.

After much-heated debate and intensive lobbying effort by the UAW, the tentative contract narrowly passed, with only 57% of G.M. workers voting for it, leaving the union bitterly divided as they face the prospect of more plant closings.

“I’ll never understand why the UAW threw in the towel, we had them on the ropes,” says UAW Local Local 1087 President Dan Maloney, whose 840-member local union voted down the contract by a 5-to-1 after the agreement failed to contain provisions that won’t guarantee that G.M.’s Rochester plant wouldn’t close.

Maloney, who is the president of the 110,000 member Rochester-Genesee Valley Area Labor Federation, worries that the close of the plant will have a terrible effect on Rochester’s slowly rebounding economy. He says that he is willing to fight his own union to be more transparent and democratic.

“It would be nice to see more open bargaining, where we do get updates at least weekly through the process,” says UAW Local 1087 President Dan Maloney. “We can let the international know through the feedback loop what we need, what we feel like when they tell us where they are at in bargaining rather than wait and dump a package on us at the end.”

Maloney says he intends to push for changes to make the bargaining process more transparent during the next constitutional convention of the UAW in 4 years.

Be the first to comment on "CTU’s open bargaining vs. the UAW’s closed-door approach"