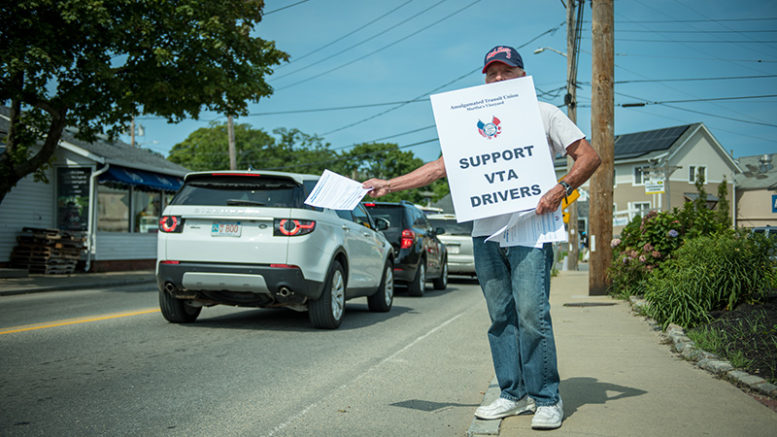 Greetings from the Burgh, where I’ve thrown my back out again and have to run to a $125 physical therapy appointment not covered by my health insurance.

While the corporate media continues to crash and burn, we are building something sustainable here at Payday. We are now up to 287 recurring donors and growing (sign up today to be a recurring donor)

Summers months are the best months to sign up for a recurring subscription. As most editors with staff jobs, go on vacation, freelancers have no one to pitch to as editors enjoy a vacation while freelancers go broke.

So help solve some of the inequalities of freelance life and donate today.

One story that Payday has been covering that no one else has is the Martha Vineyard’s Transit strike now entering its 3rd week.

The strikers are now entering their third week of striking on the Island. So far, it appears that they have massive community support.

Earlier this month, South Bend’s Mayor Pete Buttigieg held a $500-a-plate fundraising dinner on the Island. At the dinner, he invited the striking Martha Vineyard’s transit drivers to line the back of the room. During his speech to the crowd, he saluted the drivers to a standing ovation from the assembled crowd of elite Democratic donors.

“These were $500 a seat people in this room, and we got a standing ovation. Eight hundred of them standing up clapping for them,” says Martha Vineyard’s Transit Driver Rich Townes.

With ferries bringing cars to the island often being very expensive, public transit is a vital part of the tourist economy on the island.

“We are a valuable asset, we are the ones that make the system move, We are answering questions, recommending places to go, sleep, eat every day,” says Rich Townes.

Since Martha’s Vineyard has to ship in all their goods, the cost-of-living on the Vineyard is 60% higher than anywhere else in the U.S. While housing prices are twice the national average.

Despite this, bus drivers in Martha’s Vineyard make a starting wage of only $16 an hour and wages cap out at $23.50 an hour. As a result, most of the bus drivers employed in the system are retirees, who use pensions and medicare to subsidize the transit systems’ low wages.

“The only reason I can keep driving is that I am on Medicare,” says 69-year-old bus driver Rich Townes. “Most of the drivers have other forms of income because they can’t live on what they pay here.”

For more than five years, bus drivers on Martha’s Vineyard have been fighting for a first contract after the transit authority and its contractor TCI refused to recognize the union; fighting its recognition and certification in court for several years.

Instead of settling the contract dispute, the Martha Vineyard Transit Authority has brought in scab bus drivers from Puerto Rico and is paying peak season rental prices that average over $500 a night for hotel rooms on Martha’s Vineyard.

“They have blown through their yearly budget paying for these scabs,” says Townes.

With community support solidly behind them (even the local Chamber of Commerce supports the transit drivers), the Vineyard Transit Authority yesterday ordered their subcontractor TCI back to the table to bargain a new contract.

TCI had refused to meet with the union for more than two weeks. Now, facing public backlash, the transit authority in a tense emotional meeting voted to send the company back to the table.

“It’s a step in the right direction. Selectmen and town administrators were here, and they got to hear the other side”,” Andre Bonnell, a striking driver, told the Vineyard Gazette.

For more, check out the Vineyard Gazette.

At the time of the proposed Time-Warner – AT&T merger, the Communication Workers of America helped rally support from Democrats on Capitol Hill behind the deal saying that the agreement would result in more union jobs.

Now, AT&T is saying that only 83 of Time-Warner’s 23,000 employees are eligible for union neutrality. According to Bloomberg-Businessweek, CWA is now taking legal action against AT&T to enforce its neutrality agreement.

The lack of a union neutrality agreement could affect CWA”s ability to organize Time CNN, one of the largest remaining non-union media outlets.

Yesterday, the Washington Post broke the news that Sanders campaign and its staff union have been locked in tense negotiations about premium shares of health care as well as overtime pay.

Both the Biden and Warren campaign faced criticism for offering only limited paid internship opportunities while continuing to offer unpaid fellowship opportunities that they claim required fewer hours of work.

The group “Pay Our Interns” criticized Biden and Warren for their use of unpaid fellows. The Daily Beast has the story:

Guillermo Creamer, co-founder of the non-profit group Pay Our Interns, said there’s a “gray area” that emerges from having both paid and unpaid options, creating a “fine line” between the roles.

“It is interesting that some campaigns can still think about having both,” Creamer said. “The question now is: is fellowship the scapegoat for not paying individuals?”

Last week, Payday reported on how Youngstown, Ohio lost its only paper. Already, two news organization have committed to helping feel the void.

ProPublica has said that they will put a full-time reporter on the ground in Youngstown.  Now, the Compass Experiment, a joint project of McClatchy and Google, are making a three-year investment in starting to build a sustainable local digital-only outlet in Youngstown, Ohio.

(See the announcement of their project here)

Pittsburgh Post-Gazette Only Going to Print 3 Days a Week

The Pittsburgh Post-Gazette has announced that they are cutting print of their publication to only 3 days a week. The paper also announced that it was moving to an online format; meaning that Pittsburgh would be the largest city in North America without a print delay

The union quickly denounced the move.

“This is a colossal mistake given the demographics of our subscribers, who are older and want nothing to do with digital. We have not done a good enough job promoting our digital platforms to young people to make up for the difference…I fear this is the death knell for the paper where I have worked more than half my life” Pittsburgh NewsGuild President Michael Fuoco wrote in an email to the publication’s editorial leadership.

That’s all for Payday this week, gotta run to physical therapy and hopefully get back in the swing of things next week.  Pass the hat and donate today.