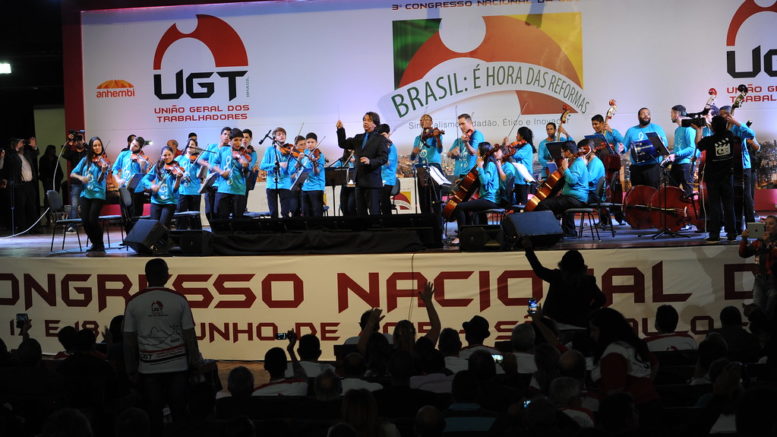 In recent years, Brazilian trade unionists have begun playing a heavier role in organizing in the South, highlighting how Brazil’s legal protections for union organizing are much more rigorous than the United States’.

In August of 2017 when Nissan workers were fighting in an uphill union battle in Canton, Mississippi, workers in Brazil went on strike and shut down not just factories, but also auto dealerships.

“They protested in solidarity,” Nissan union leader Morris Mock told Payday Report and franknews in an interview last month. “They shut the factory down. It was really amazing how Brazilian unions reach out.”

Brazilian Nissan workers even traveled to Mississippi to walk the picket line with Nissan workers there in the closing days of the campaign. (Watch as Payday founder Mike Elk talked en Portuguese with Brazilian trade union leaders in the summer of 2017.)

Now, in a video released to Payday Report, Ricardo Patah, the President of  the 14-million member Brazilian UGT trade federation (União Geral dos Trabalhadores) talks about the importance of the Nissan union campaign in building Brazilian solidarity with organizing in the U.S. South.

“Morris, who is helping with this campaign, knows our solidarity with Nissan workers (in Mississippi),” said Patah speaking of the union’s relationship with Nissan union leader Morris Mock, who has visited Brazil on multiple occasions to speak at trade union federation rallies.

Patah also sent a message of solidarity to Amazon workers as they await election results in the historic union election.

As workers wait for the final days of the Amazon union campaign in Alabama to close, Patah wants to make one thing clear:

“We are from the UGT Central Union and are in solidarity with your struggle. It’s so important that you build a union that represents you all. It’s fundamental. Long live the Amazon workers in Alabama.”