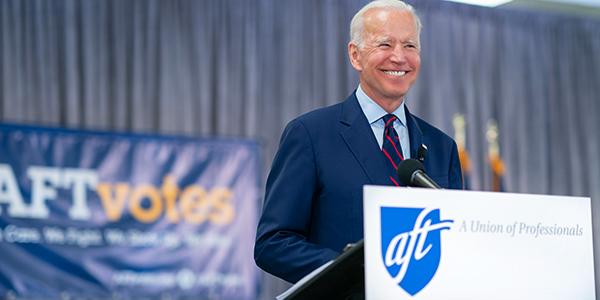 Over 800 teachers in the Scranton School District are set to strike tomorrow in one of the largest teacher strikes this year.

Ever since the previous teachers’ union contract in Scranton expired five years ago and the school district was placed under state financial oversight in 2017, teachers have been working without a union contract.

Teachers are now set to strike beginning tomorrow to demand higher pay and put an end to concessions.

But while teachers in Scranton prepare to strike, they’re hoping Scranton native President Joe Biden will get involved in their labor struggle.

So far they’ve only felt frustration in their pleas.

Scranton teachers haven’t received a raise in five years while simultaneously having their health care benefits cut in the midst of the pandemic. In the last two years alone, 113 educators, or about one-eighth of all teachers and paraprofessionals in the school district, have left.

“Scranton’s public schools are in crisis, and instead of fixing it fairly—using the new, available funds from the federal rescue and recovery packages—the district and the state-appointed financial manager just want teachers to keep sacrificing,” Boland told Payday Report. “See us on the picket lines. Scranton educators, parents, and students have sacrificed and sacrificed, and we are tired of holding the bag for district mismanagement.”

For 24-year-old middle school teacher Kathleen Beckwith, it’s also disappointing to see that President Biden, who grew up in Scranton, hasn’t gotten involved yet in the contract dispute.

“We were hoping that we would get some attention with it being President Biden’s hometown, but it doesn’t seem like that’s been much help, he really hasn’t reached out yet to help us,” Beckwith told Payday. “So it’s a little disappointing.”

Indeed, public opinion polling conducted by Data for Progress in October showed broad bipartisan support for the strike wave across voting demographics. Getting on the picket line and showing support for striking teachers could not just help Biden, but help his hard-hit Rust Belt hometown greatly.

Many teachers have said they felt strongly about the city. Some teachers, like Adam McMorick, have resorted to taking on second jobs in retail just to make ends meet.

“I had a teaching job in another district that is currently in a much better, long-term union contract and I came back to Scranton because this is where I’m from,” said McCormick. “I just think there’s value to living in the community and shaping the priority and education of the kids in the community where I live.”

The decision by McMorick and others to strike didn’t come easily as many teachers were already worried about how several children lost learning time during the pandemic. However, they felt the need to strike to improve the school system in Scranton for the long term.

Indeed, many Scranton teachers who are struggling to get by, will be hurt financially by the strike. Already, the school district has informed teachers they will immediately shut off healthcare for all striking teachers when teachers go on strike Wednesday.

“We have people in our membership who are going to be hurting because of the strike, but it is something that we feel needs to be done,” said Beckwith. “We have a staffing crisis, nobody wants to work in Scranton, because of the lack of money and working conditions.”

“I certainly hope that President Biden and Senator Casey, who’s also from the area, I hope they do have an eye on it,” said McCormick. “I hope they get involved,  participate, and recognize the value that we bring to the city.”

Donate to Help Us Continue to Cover the Strike Wave

Be the first to comment on "As Scranton Teachers Strike, Biden Is MIA in His Hometown"