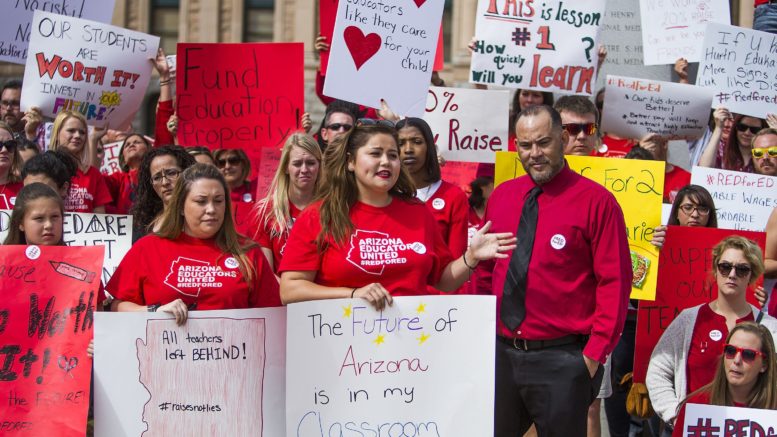 Following upon the success of teachers in West Virginia and Oklahoma, teachers in Arizona have voted to strike in the first-ever statewide strike. The strike will begin on Thursday April 26th.

“This vote was not an easy decision for educators,” said AEA Vice President and Isaac Middle School teacher Marisol Garcia. “As I turned in my ballot today, I thought about my son, my colleagues, and my students. By voting today, I am standing up for the public schools my son and other students in Arizona deserve.”

The strike vote comes after Republican Arizona Governor Doug Ducey proposed that teachers receive a 20% raise with 9% of the raise set to take effect next year.

However, teachers’ groups balked at the proposal after Ducey claimed that he could pay for the raise through what they perceived as overly optimistic revenue projections and cuts to other programs.

The Arizona Parent Teachers Association as well as the Save Our Schools Arizona Coalition pulled support from the plan after their own internal study of the matter showed that there was no way the Republicans could pay for it without raising taxes on corporations and the rich.

“It is now clear the existing proposal is not sustainable or comprehensive as a means of increasing educator pay and reinvesting in Arizona’s classrooms and schools,” said Save Our Schools Arizona spokeswoman Dawn Penich-Thacker.

Educators in Arizona say that unless they get a serious plan is put on the table, they are prepared to take strike action. In show of a strength, hundreds of schools across Arizona have been holding walk-ins, where teachers wear #RedforEd and collectively all walk into school at the same time where they’ll mark their dissent on a pole similar to the steel flagpole seen in front of administrative buildings.

Teachers in Arizona say they are fed up and ready to strike.

“After years of starving our schools, some classes are stuffed with kids, while others sit empty because there isn’t a teacher to teach,” said AEU organizer and Littleton elementary music teacher Noah Karvelis. “The #RedforEd movement has provided educators the opportunity to voice what action they want to take in an historic statewide vote.”

Donate to Payday to Help Us Cover the Historic Arizona Teachers’ Strike.