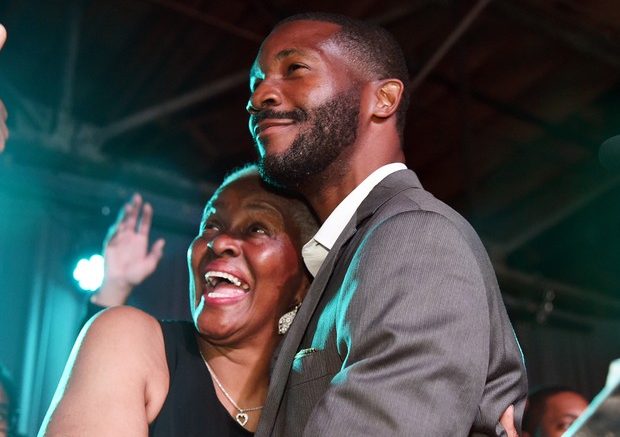 Tuesday night, 36-year-old Birmingham school board member Randall Woodfin defeated 63-year-old incumbent Birmingham Mayor William Bell with 59 percent of the vote to Bell’s 41. Bell has been a fixture in city politics for decades, having been elected to City Council in 1979, two years before Woodfin was even born.

Standing on stage, surrounded by dozens of his former Morehouse College classmates that had helped him fundraise all over the country, Woodfin sent a message that a new generation of change was coming to the South.

“The South has something to say,” Woodfin told Payday in an interview shortly before 1 a.m., early Wednesday.

While Woodfin remained optimistic about his chances during the campaign, few suspected that he would even make it to a runoff election with Bell, let alone beat him. Woodfin’s electoral success is credited to the growing discontent among newly energized young voters in the South upset with a Southern Democratic Party that has become too friendly with developers.

Along with 34-year-old Chokwe Antar Lumumba, who defeated an incumbent mayor in Jackson, Mississippi, in March, Woodfin’s victory could mark the beginning of things to come.

During his campaign, Woodfin repeatedly criticized Bell for using corporate tax dollars to promote gentrification instead of investing in rebuilding the city’s crumbling infrastructure. Running on the slogan “We Deserve Better,” Woodfin pledged to bring a “people-first vision for all 99 neighborhoods.”

Woodfin focused aggressively on raising the minimum wage in the city, which has actually seen poverty rates increase during the economic recovery, from 26.4 percent of the population living in poverty in 2010 to 30.9 percent in 2015.

Not afraid to be labeled as radical, Woodfin called for a massive city jobs program based on the 1979 jobs program instituted by D.C.’s black radical mayor Marion Barry.

“There’s not a shortage of funding in Birmingham,” Woodfin told the Huffington Post’s Daniel Marans in a long interview last July. “There’s a shortage of priorities and a vision to move the city forward with tax dollars in an appropriate and transparent way.”

As a former prosecutor, Woodfin zeroed in on the need for criminal justice reform, calling for the creation of tax credits for employers who hired ex-offenders. He also called for free college tuition at community colleges owned by the city and county.

Sanders similarly backed Lumumba in his successful bid in Jackson. In addition to Lumumba, Our Revolution has backed progressive champion Georgia State Senator Vincent Fort in his bid to win Atlanta’s mayoral office November 7. A win in that city’s election could accelerate the tide of change slowly hitting the Southern Democratic Party.

With young progressive mayors taking the reins in both Alabama’s and Mississippi’s biggest city, many wonder what other corporate Democrats in the South will be targeted.

One prime target could be Louisville Mayor Greg Fischer, who is up for re-election in 2018. Fischer has angered labor by pushing charter schools in the city. He has also faced criticism for seeking concessions from public-employee unions while seeking tax breaks for major developers.

Fischer has not only rankled organized labor with his push for charter schools, but he has also angered other Democrats.

“For him not to consult with any of us on this position … I think it’s a betrayal of JCPS [Jefferson County Public Schools] and the 101,000 students that are part of the district,” board chairman Chris Brady told the Louisville Courier-Journal in March.

Currently, a debate is brewing among many in organized labor about whether it would be viable to back a progressive challenger.

So far, Ryan Fenwick, a public interest lawyer, and Jackie Green, a bike shop owner, have entered the race against Fischer, which is nearly a year away. Organized labor has yet to attract a top-tier candidate, as many in labor are hesitant to start an uphill battle against Fischer.

Then again, a few months ago, no one thought Woodfin could win an upset in Birmingham.

Woodfin tells Payday that he hopes that his victory inspires others wanting to challenge establishment Democrats.

“This is always an uphill battle,” says Woodfin. “There is nothing that can replace commitment and work ethic.”

Donate to help Payday continue to cover the growing movement to change the Southern Democratic Party.

Be the first to comment on "After Defeat of Incumbent Birmingham Mayor, Could Louisville’s Mayor Be Next?"