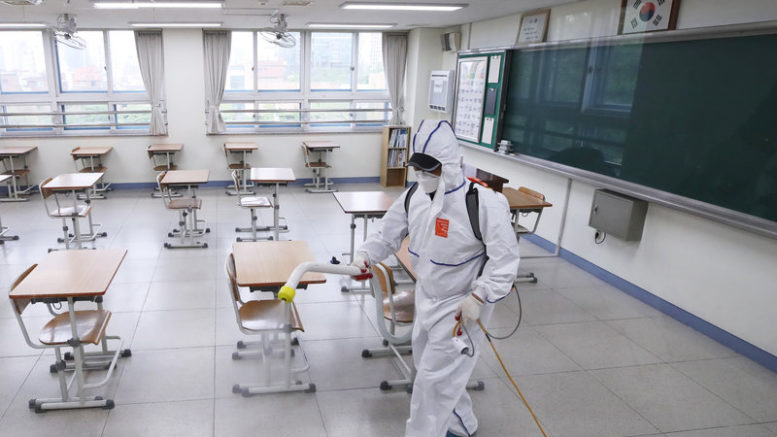 A person sprays disinfectant at a high school amid the coronavirus outbreak on Monday, in Seoul, South Korea.

As the recession delivers severe budget cuts to education, many teachers are worried they won’t be able to re-open schools safely, which has left some considering the possibility of a strike.

Given the physical distance needed, teachers are considering the “hybrid basis,” of teaching as the best model for re-opening, says American Federation of Teachers President Randi Weingarten about teaching in a combination of online and in-person instruction.

“Our members understand that in-school teaching is really important and with the safeguards we have been pushing since April, 76% of them were comfortable with re-opening,” says Weingarten, referring to one survey released earlier this month the AFT where 76% of teachers supported some form of school re-opening if it could be done in a safe and effective way.

Donald Trump and Education Secretary Betsy DeVos, however, dropped a bomb on teachers last week while teachers were hoping to negotiate a contract over re-opening safely.

They threatened that if schools didn’t re-open this fall that they would lose their federal funding.

Trump and DeVos’ threats came on the heels of many teachers fearing that they don’t have enough resources to open schools.

“We are seeing states project 20% budget cuts on schools when we know that to re-open safely, we need 20% more,” DeVos said, explaining that no new state aid would be needed to bolster the revenue loss.

“What Trump and Devos did was open the floodgates, which where our members before were very focused on having safe conditions because people want to start school because they want to be back to school with our kids,” says Weingarten. “But Trump and DeVos basically eviscerated any trust that anybody has in the federal government.”

One study by the Kaiser Family Network found that 1 in 4 teachers, approximately 1.5 million teachers, are considered “at-risk” if they are infected with COVID.

Weingarten says that neither Trump nor DeVos has a re-opening plan for schools.

“Neither of them are providing resources,” she says.

In lieu of this, the American Federation of Teachers is preparing for the possibility of strikes. They are advising members on how they can use their rights under federal law to resist re-opening.

The union is sending out legal guidance obtained exclusively by Payday Report instructing teachers in how they can use the Americans with Disabilities Act and the Family and Medical Leave Act to stay home if they feel it’s unsafe to go to work.

The union is instructing its members to seek reasonable accommodations under the Americans with Disability Act to continue teaching online from home if they are worried about getting sick from going into work. The union is also education its member on how to use the Family Medical and Leave Act, the Families First Coronavirus Response Act, collective bargaining rights, and other federal laws to prevent “at-risk” teachers from being forced to work in the classroom.

Weingarten, who helped lead a bold #RedforEd strikes, says her union is prepared to strike in districts if they can’t re-open safely.

“I don’t take anything off the table when it comes to trying to make sure people are safe,” says Weingarten.

Without a safe re-opening, Weingarten fears that the long-term effects could be catastrophic, even after the pandemic is defeated.

“I fear that we are gonna have a brain drain because people are really worried,” says Weingarten. “They are lots of vulnerable educators.”