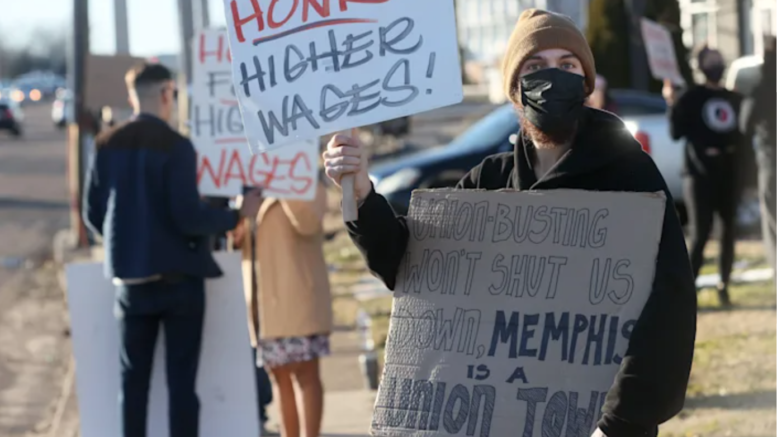 Greetings from the Burgh folks, where Payday is tracking the latest happening at Starbucks.

Big thanks to everyone who donated to my long COVID recovery fund.

Unionizing campaigns at Starbucks have been gaining viral energy, with more than 70 stores in 20 states planning unionizing efforts.

However, Starbucks now appears to be fighting back as momentum builds for a nationwide Starbucks workers’ union.

Yesterday, seven employees were fired while union organizing at a Starbucks in Memphis. Starbucks claims the workers were fired for breaking a variety of store policies, including allowing a local TV crew to film in the store.

“They’re saying that I broke a whole bunch of policies that have never been enforced before,” former shift supervisor Nikki Taylor told WMC-TV. “I have worked for this company for two years and I have literally never been written up or talked to about any of the policies that I was fired for today.”

For more, check out WMC-TV.

Noble Esports Workers Walk Out After Not Being Paid

“Today, without paying us for our work OR formally terminating our contracts, Kyle has deactivated the @NobleGG Twitter account. I am missing a month of salary, as well as all of my work samples from the past year. It is incredibly frustrating and unfair. It is not our fault that the community has become aware of Kyle’s wrongdoings,” wrote one former employee on Twitter.

For more, check out Dot Esports.

For years, congressional offices have struggled to retain staff because of low pay. Now, for the first time, both Speaker of the House Nancy Pelosi and Senate Majority Leader Chuck Schumer are supporting the right of Congressional staff to unionize.

Congress would have to pass a new law granting Capitol Hill staff collective bargaining rights to unionize. Today, President Biden signaled he would support such a law.

“He supports the right of any individual to seek to join a union, to collective bargain, and of course Capitol Hill staffers are certainly individuals who are pursuing that,” White House Press Secretary Jen Psaki said in a press conference yesterday.

For more, check out The Hill.

Instacart Worker Killed on the Job
Finally, Payday Report pays tribute to 38-year-old Instacart worker Justin Krumbah who was killed in a shooting rampage while working in a Richland, Washington Fred Meyer supermarket.

The Independent has a look at his life:

In his last post before he died, he had shared a photo of him smiling cheerily dressed in his work apron.

The enthusiastic worker spoke of his “pride” in his job when a friend commented that he wears an apron.

“I take pride in my work no matter what I do!” he responded.

“Always gotta be professional!! And it’s sped up my production time also!!”

For more, check out the Independent.