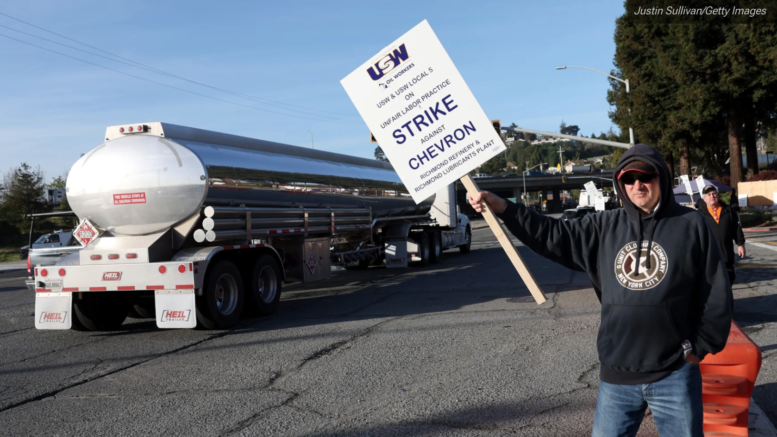 Greetings from the Burgh, where it’s a beautiful 60 degrees. The grass is turning green and it seems like spring is finally upon us.

Today, more than 500 workers, members of the Steelworkers union, went on strike at Chevron in Richmond, California.

At a time when gas prices are hitting record highs, workers say they are frustrated by Chevron’s refusal to agree to a 5% wage increase, which would keep up with the cost of inflation.

The union also wants to see Chevron place limits on mandatory overtime that forces some workers to sometimes work up to 60 hours a week.

“It’s disappointing that Chevron would walk away from the table instead of bargaining in good faith with its dedicated work force,” said Mike Smith, chair of the USW’s National Oil Bargaining Program said in a statement released by the union.  “[United Steelworkers] members continued to report for work throughout the pandemic so our nation could meet its energy needs. They deserve a fair contract that reflects their sacrifice.”

For more on the strike, check out Reuters.

More than 150 Starbucks stores have filed petitions with the National Labor Relations Board seeking to unionize since December with additional stores announcing union drives being announced weekly, sometimes daily.

However, Starbucks has become aggressive with the union organizers who have accused Starbucks of firing and disciplining pro-union workers in several locations.

“The response to our union campaign from our district manager, Sara Jenkins has been aggressive. She has cornered us one on one, sometimes with another manager to intimidate us. Forced us to decide between being demoted, resigning or changing availability that conflicts with college classes and second jobs…We want the one-on-ones to stop,” Starbucks employee Hannah Edwards said in a statement.

For more, check out KSHB.

In Canada, over 3,000 railroad workers, members of the Teamsters, have been locked out since Sunday at Canada Pacific as they seek a wage increase. The union says the lockout couldn’t have come at a worse time.

“As Canadians grapple with a never-ending pandemic, exploding commodity prices and the war in Ukraine, the rail carrier is adding an unnecessary layer of insecurity, especially for those who depend on the rail network,″ Teamsters Canada said in a statement.

For more on the lockout, check out the AP.

Alright folks, that’s all for today. If you can, donate today to help support our work on union busting in national parks, and help pay for health insurance.

Please, consider signing up as one of our 677 recurring donors today.