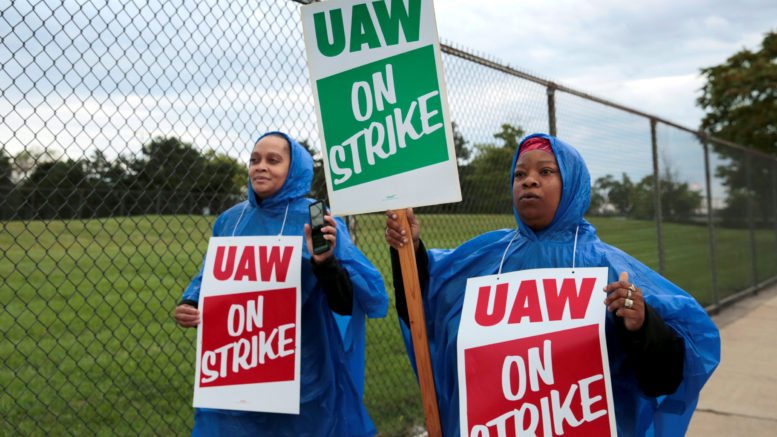 At midnight tonight, 49,000 members of the United Autoworkers will go on strike at dozens of General Motors plants across the country. The strike will be the largest strike of industrial workers in 12 years.

The strike comes as anger continues to brew over GM’s decision to close GM plants in both Lordstown, Ohio, and Hamtramck, outside of Detroit. The union is pushing for both of the plants to be converted into new General Motors facilities to make electric cars.

Workers at General Motors are also upset about a lingering two-tier wage system, accepted by the union as a concession as part of the auto industry bailout that they say continues to pit older workers against younger workers. Additionally, workers are frustrated about the degree that formerly unionized work is now being outsourced to temporary workers.

“General Motors needs to understand that we stood up for GM when they needed us,” Ted Krumm, head of the union’s bargaining committee in talks with GM, said at the press conference Sunday. “These are profitable times… and we deserve a fair contract.”

The strike also has the potential to revive the UAW, which has been marred in a series of corruption scandals. Recently, 5 top UAW officials have been convicted for accepting bribes from auto employers in exchange for concessions at the bargaining table.

Many union-ambivalent workers cited the corruption scandal in UAW’s recent high profile defeat in its attempt to unionize Volkswagen’s Chattanooga plant in June. In Chattanooga, the union lost by a mere 29 votes and many anti-union workers interviewed by Payday Report said they were skeptical given the corruption scandal that the UAW would stand up for them. (See Payday’s coverage of anti-union sentiment in Chattanooga)

A successful strike at General Motors could persuade UAW members that UAW is willing to take significant risks to fight on behalf of its union members; potentially opening the door to more organizing in the anti-union South.

The strike could also put Donald Trump in an uncomfortable position in the Rust Belt. Trump has previously taken to Twitter to mock the UAW in its attempt to keep the Lordstown, Ohio plant open. If Trump were to turn against the striking workers, it could potentially alienate him from his base in crucial battleground states like Ohio and Michigan ahead of the 2020 election.

The UAW and General Motors appear far apart at this point, and a resolution does not appear near in sight. The UAW says that it is prepared to dig in for a long fight at General Motors.

“Our members have spoken; we have taken action,and this is a decision we did not make lightly. We are committed to a strong contract at GM that recognizes our UAW members, who make some of the greatest products in the world and make GM so profitable” said UAW National Bargaining Committee Chair Ted Krumm of UAW Local 652

Help Payday Cover the General Motors Strike on the Ground

Be the first to comment on "49,000 General Motors Workers to Strike at Midnight Tonight"