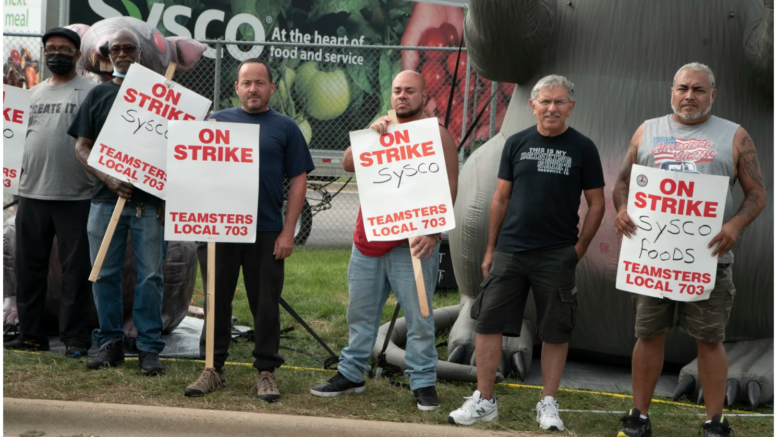 Greetings from the Burgh, where Payday’s getting back into the swing of things after taking several weeks off to rest and recover from health issues.

Thanks again to all those who donated to our vacation fund.

In Chicago, 125 warehouse workers and 200 truck drivers at a Sysco Food warehouse in the northern suburb of Des Plaines, went on strike Monday to protest unfair treatment by management.

The strike is expected to affect hundreds of restaurants, as well as numerous schools and hospitals, that purchase Sysco foods.

“These warehouse workers have been working without a contract, day-in and day-out, keeping American schools, restaurants, hospitals and more stocked with food and supplies,” Jake Berent of Teamsters Joint Council No. 25  told Eater Chicago. “These workers were pushed too far by the employer, and enough was enough. The disrespect Sysco is showing towards these workers, whom its CEO referred to as ‘heroes’ just one year ago, is simply disgusting.”

For more, check out Eater Chicago.

40 Chicago Bartenders Walk Out of Festival Over Unsafe Conditions

Last weekend, over 40 bartenders walked out of the Lyrical Lemonade Summer Smash Festival after a lack of security led to drunken festival attendees rushing their understaffed booths and becoming violent.

“I’ve never been in a situation in my entire life where there was so much weight on me,” Ellie Pettit, a 22-year-old bartender told Block Club Chicago. “I genuinely thought at one point that I wasn’t going to make it out of that festival alive.”

“Due to higher management the staff at this location has walked out because we were being treated poorly, overworked and underpaid,” the coffee shop employees wrote on a sign posted on the door. “We want to thank each and every one of our customers for making every day great and always treating us with love and kindness.”

For more, check out the Toledo Blade.

Folks, I just want to thank our readers for really having Payday’s back.

Recently, a $10,000 grant to maintain our Strike Tracker expired and we put out a call out to replace the funds.

Thank you to everyone who donated.

We want to keep the Strike Tracker going, so keep on donating.

And, please, sign up as one of our 618 recurring donors today to keep Payday strong.

It is with a heavy heart that Payday writes of the passing of 87-year-old historian and activist Michael Munk. For years, I have been on Munk’s mailing list and collaborated with him frequently. Many of his insights and articles have found their way into Payday.

An immigrant from Czechoslovakia, Munk documented the radical labor traditions of the Pacific Northwest. A principled person, Munk even called out his own father, a professor at Reed College, for his role in red-baiting one of his favorite Reed college professors Stanley Moore. The Oregonian has the story:

“He woke me up,” Munk said years later. “I thought, ‘My God, people are arguing about something important.’”

Caught up in the nationwide “Red Scare” now commonly known as McCarthyism, Reed College fired Moore in 1954 for refusing to testify before the House Un-American Activities Committee.

A key player in Moore’s removal from his tenured position: Frank Munk, who would later say he viewed communism at that time “as the most immediate evil.”

Despite his father’s role in the dismissal, Mike believed Moore had been treated unfairly. He spent years researching and writing about the incident.

“It was the clearest test of academic freedom in the nation,” he told The Oregonian in 1996

Please go to The Oregonian to read the full obituary of this incredible man.

May Michael Munk’s memory always be a blessing in the fight for justice and equality.

That’s all for today. Hear about a strike or walkout or just want to share some comments? Drop us a line at [email protected].

Or, sign up as one of our 618 recurring donors today.