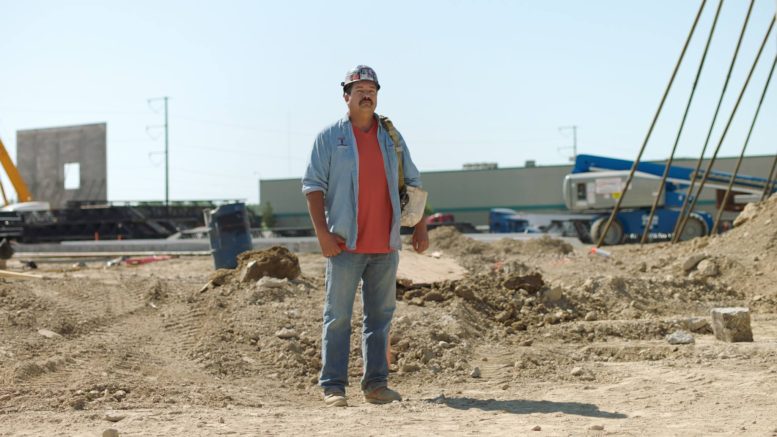 RACINE, WISCONSIN – Despite his 6’2 frame, the half-Mexican, half-Polish Army veteran known as the “@IronStache” on Twitter is the epitome of a gentle giant. Holding a beef brisket sandwich in his hand, he hugs, back slaps, and laughs his way through the crowd at the Juneteenth parade on the lakefront of Racine.

“I’m running for Congress against Paul Ryan,” ironworker Randy Bryce struggles to tell an African American woman over the noise of a gospel choir singing on the stage behind them.

Ryan, the Speaker of the House and a former vice presidential candidate, has more than $8 million in the bank for his re-election bid. By contrast, Bryce is a rank and file ironworker activist who has built some of Southeast Wisconsin’s best-known landmarks, including Milwaukee’s Miller Park and the landmark Northwestern Mutual Building.

However, it’s not an entirely uphill battle. Ryan’s district includes the pro-union bastions of Racine and Kenosha, as well as the suburban Milwaukee Republican stronghold of Waukesha. According to the Cook Political Report, the district is only 5 points more Republican than Democratic. If 2018 turns out to be a wave election year, some think Ryan could be defeated by a candidate like Bryce in such a marginal swing district.

So far, Bryce – an Ironworkers Local 8 member – has lined up endorsements from the Milwaukee Building Trades, state Senator Chris Larson, and former House candidate Rob Zerban, who ran against Ryan in 2012 and 2014.

He has also enlisted the help of Bill Hyers, who managed the winning 2013 mayoral campaign of New York City Mayor Bill de Blasio and has worked on campaigns for the late Senator Paul Wellstone (D-MN) and Senator Tammy Baldwin (D-WI). Former Milwaukee Democratic Party Chair Sachin Ccheda has signed up to help build a grassroots army to defeat Ryan.

Many in the district feel that if anyone could beat Ryan, it would be a rank and file union activist like Bryce.

“People know that the system is rigged and something has to be done, and Donald Trump took advantage of that,” says SEIU Healthcare Wisconsin’s Bruce Coburn, who serves as the union’s Vice President for Politics and Growth. “Randy, though, is someone who really believes in people and has shown it in all the years he has been in the labor movement.”

I first got to know Randy through the #wiunion hashtag during the Occupation of Wisconsin Capitol in 2011, and since then we have become personal friends. Bryce was part of the tens of thousands who occupied the Capitol in order to stop Scott Walker’s anti-union agenda.

Bryce sips Limeaid in the living room of his small two bedroom apartment outside of Racine as he recalls that battle.

“Walker’s strategy was to divide and conquer,”  Bryce says. “His strategy was pointing out people and saying they are the reason that the others didn’t have it as good as they possibly could.  Now that’s being taken to the national level with Donald Trump.”

“Just to get the [White House], he pointed the finger at Muslims, at people from Mexico, at immigrants, and there is a huge divide,” Bryce continues. “Now, people are looking at why we are different and thinking that’s the reason why they don’t have what they could.”

A year ago, Bryce wasn’t preparing for a Congressional campaign. This isn’t his first race; he ran for the State Assembly back in 2012, where he lost in the primary. Two years later, he ran for Wisconsin Senate in a conservative district and lost to Republican Van Wanggaard.

He says that he was moved to run, however, after being approached by a number of people in the wake of Trump’s election. Finally, during this year’s May Day protest – which saw over 20,000 show up in the streets of Milwaukee – Bryce says he began to believe that he could build the type of multi-racial coalition that could defeat Ryan.

If elected to Congress, he sees his role there as being more of a shop steward than a politician, and that he aims to run a campaign that amplifies the voices of others. “For an African American woman, there is no possible way that I can put myself into that woman’s frame of mind, the struggles she faces on a daily basis,” Bryce says. “I could do something to pretend, but I can’t experience it myself, so I need to rely on other people.”

Although he was a Sanders surrogate during the primary, he campaigned for Hillary Clinton in the general election and would have been an elector for her had she won. Given the ongoing struggle for control of the party, many in the district say that Bryce is a candidate who could bring Democrats together.

If successful, he would be only the third American since 1862 to defeat a sitting Speaker. It’s a given that the GOP and their corporate allies will spend heavily in the swing district to avoid that embarrassment.

He’s not naive about his long odds. But Bryce says his experience as a rank and file ironworker – having been suspended hundreds of feet above the ground while working – has given him the confidence to take on the almost impossible task.

“Being an ironworker, I have seen some things that, unless I have seen them with my own eyes and been part of it, I would say you can’t do that – that’s impossible,” says Bryce. “You know, you are gonna walk up on a two and half inch piece of metal, you are gonna be up three hundred feet in the air and walk across and carry something to get to a place to wield – that’s impossible…When ironworkers hear somebody say, ‘We can’t, it means ‘I won’t.’”

(Full Disclosure: Randy Bryce was one of the first 20 contributors to Payday Report. He also fed Payday Senior Labor Reporter Mike Elk a just amazing slow cooked chicken in his home outside of Racine, Wisconsin.)

Contribute to Payday’s Summer Fundraising Drive here and help us continue covering workers that the mainstream media ignores. Also, if you got a few bucks, donate them to help Randy Bryce build a grassroots army to defeat Paul Ryan.

Be the first to comment on "BREAKING: Ironworker Randy Bryce Announces Bid to Unseat Paul Ryan"