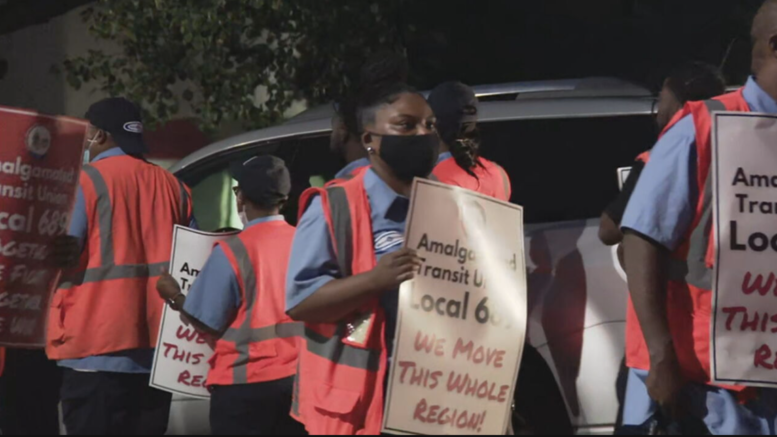 Folks, Greetings from the Burgh, where it’s a beautiful 80-degree day.

$190 Short of Our Monthly Goal

We are $190 short of our monthly goal with just a few hours left to go until midnight. We haven’t been hitting the goal in the last few months since I’ve been sick, so it’s great to be so close.

Donate to help us meet our monthly goal. Please, if you can, sign up as one of our 708 recurring donors today.

In the suburbs of Washington, D.C., over 200 transit workers are on strike against MetroAccess contractor Transdev.

“It’s really sad to watch your co-workers struggle to come here to run these routes like they do because they can’t afford to take off,” striking driver Valerie Thomas told WJLA. “We want better healthcare, we want more money, we would like to have a pension.”

For more, check out WJLA

A group of hip hop veterans including Chuck D, Kurtis Blow, Doug E. Fresh, Slick Rick and KRS-One have launched the Hip Hop Alliance, which bills itself as the first-ever union in the hip hop industry.  (Check out the video of the launch here)

“Shout out to those who work behind the scenes to make Hip Hop Happen,” the group’s chairman KRS-One wrote in a message announcing the Hip Hop Alliance. “Managers, Artists, Agents, Engineers and Producers, what is the retirement plan, healthcare plan, and fare commission standards for us? What is a fare wage for what we do within ‘hip-hop’ as an industry? Those that drive and assist artists, those that protect artists, those that promote the show, and those that sell merchandise, among other roles and responsibilities that make hip hop happen; Who speaks for us?”

For more on the effort, check out Vibe

A new lawsuit alleges that PetSmart is forcing groomers to assume $5,000 in debt for training in order to work at their store. If a worker leaves after less than two years, they have to repay the training fee in full.

For more, check out PetSmart

At New Mexico State University, the police were called on UE union members negotiating a contract after a graduate worker tore up a contract proposal made by the administration. An administrator claimed that a piece of paper had been hit in the face.

An NMSU police report written by Sgt. John Lovelace stated that officers were first dispatched to the scene because a caller claimed students were throwing staplers. Lovelace said officers found no evidence to support that claim.

NMSUPD made contact with the students gathered outside the meeting room and established the party was not doing anything illegal. Lovelace proceeded to talk with the NMSU administrators inside the meeting room when he was made aware of Jackson’s throwing of the pieces of paper into the room.

“While speaking with Jones, I asked if she wished to pursue charges against Jackson. Originally, she said she did, but then changed her mind,” Lovelace wrote in the report.

For more, check out the Las Cruce Sun News

Inside Look at how NewsGuild Campaign Failed

Finally, Poytner has a look at how a union campaign by the NewsGuild at Outside Magazine failed:

Immediately after the staff asked Outside to voluntarily recognize the union, the company launched an unusually aggressive anti-union campaign. The Denver Newspaper Guild had prepared the staff for most of the company’s talking points, but one argument caught everyone off guard.

A union, Outside argued, would jeopardize the company’s ability to attract funding from venture capital firms. At stake was not just the jobs of the editorial staff, but the entire company. In addition to Outside Magazine, the company — which is headquartered in Santa Fe, New Mexico — had more than 20 other publications, encompassing roughly 580 employees.

Not wanting to be responsible for the potential loss of hundreds of jobs, the magazine staff withdrew their petition for an NLRB election.

For more, check out Poynter

Alright folks, that’s all for today. Donate to help us hit our monthly goal. Please, if you can, sign up as one of our 708 recurring donors today.

Keep sending tips, story ideas, comments, and suggestions to [email protected].  Thanks for all the suggestions and support.