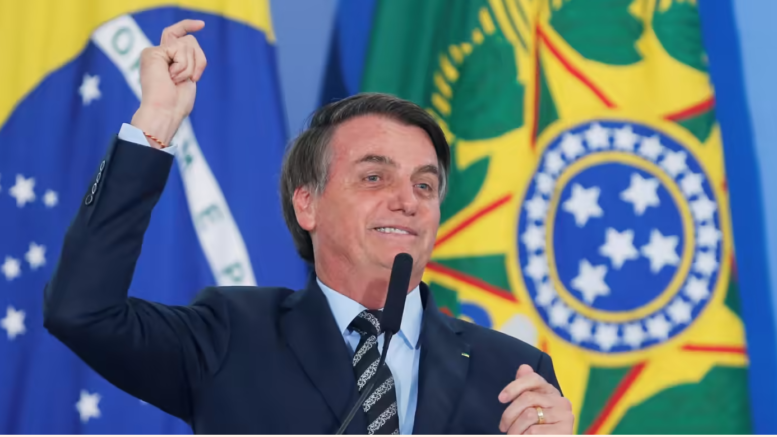 L’Shana Tova from Washington DC, where I’m writing this newsletter from Politics & Prose, which recently became the first bookstore in DC to win a union contract.

In 48 Hours, Melk Leaving for Brasil – Help Him Buy a Chromebook Before Leaving

Earlier today, I successfully replaced my passport here in DC. So, in less than 48 hours, I’ll be flying out to Rio de Janeiro. The next two days will be wild as I run around stocking up on last-minute supplies.

One thing on my list is a $200 Chromebook. With Brasil’s high robbery rates, I am nervous about bringing my Macbook out with me when covering protests. If I had something like a cheap Chromebook, I wouldn’t need to worry so much in case it was stolen. I could then leave my Macbook back at the apartment I’m staying at as backup.

Donate today to help me buy a cheap Chromebook for covering the protests in Brasil.

With the election for the first round of the Brazilian Presidential election set for Sunday and Bolsonaro trailing by more than 10%, Bolsonaro is pushing claims that Lula and the election commission are rigging the election.

According to a  new study by NetLab, a special unit at the Federal University of Rio de Janeiro (UFRJ), YouTube viewers are being shown Bolsonaro conspiracy theories more than any other election content in Brasil.

NetLab created 18 new user profiles with no viewing histories and still found that even then, Bolsonaro videos questioning the electoral integrity were recommended to them the most.

The excellent English-language publication Brasilwire has the story:

“In the new study, across 18 test visits to the platform, channels belonging to right wing media group Jovem Pan (nicknamed “Jovem Klan” by Brazilian progressives) were indicated 14 times on the YouTube homepage, with one or more suggested videos. The most recommended to users was Jair Bolsonaro’s appearance in the JP show Pânico, on August 26.

The Bolsonaro interview was recommended in eight test visits, in five different versions, which together add up to 9.6 million views. In the video, the president makes baseless claims about the electoral process, such as that the Armed Forces have discovered “hundreds of vulnerabilities” in electronic voting machines.

Content from Jovem Pan appeared as the first recommendation in 55% of visits (10 out of 18), well ahead of other news channels.”

For more, check out Brasilwire.

Back in the U.S., over a thousand airport workers are on strike at the San Francisco International Airport. The workers say many are making the minimum San Franciscan wage of $16.99 an hour and can’t live off their salary.

United Club Lounge worker Lucinda told SF Gate that she has often had to sleep in her car or in the lounge because she doesn’t have enough time to make it back to where she can afford to live in San Jose.

“Wages for us are really, really low. It’s not enough for me to support my family,” To told SF Gate.

For more, check out SF Gate.

In Ogden, Utah, movie theater workers at Brewvies Ogden went on strike Sunday over safety concerns. Workers cited a recent break-in at the movie theater and problems with gas leaks as causes of concern.

In June, Utah OSHA cited the movie theater for four violations, including three serious ones of electrical hazards that could cause fires. Since then, workers say that their safety concerns haven’t been addressed, and they have decided to walk out.

“I’m just going there to do a job, to do a very simple job. I shouldn’t feel like I have to risk my life to do that,” employee Cameron Smith told KTSU.

For more, check out KTSU.

At Windham Hospital in Willimantic, Connecticut, over 100 nurses went on a 48-hour strike late last week over being forced to work overtime.

Some nurses at the hospital say they are routinely working 16-hour shifts. Sometimes, they receive notice of their mandatory overtime only when they are getting ready to go home from their pre-scheduled shifts.

After months of negotiations, the union says it has gotten nowhere in addressing the mandatory overtime issues and felt forced to strike.

“We were heroes and now we’re being treated like zeroes,” nurse Karla Beckert told WFSB.

For more, check out WFSB.

Alright, folks, that’s all for today. I am flying out to Brasil on Wednesday to cover the election on Sunday.

To help us cover this crucial presidential election in Brasil, we need your help. Chip in today, or sign up as one of our 725 recurring donors.