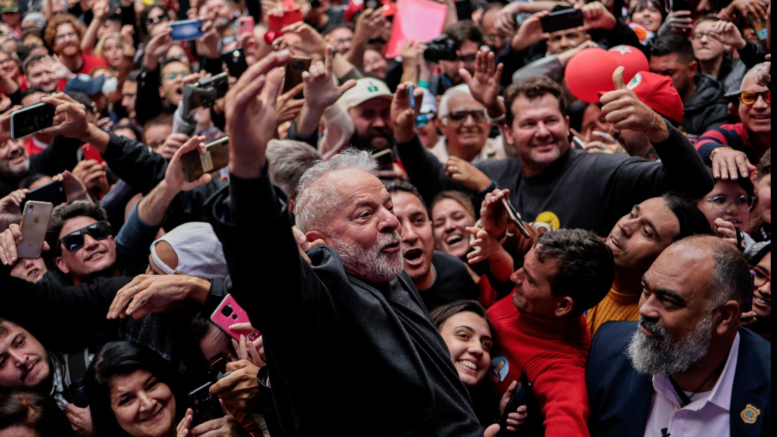 Greetings from Washington, D.C., where I’m getting ready to fly out to Rio de Janeiro in less than 24 hours. Thanks again to all our readers who donated to make this possible.

In Brasil, federal police guarding Lula have asked the federal government for more resources, including drones, tactical SWAT teams, and increased surveillance measures to protect Lula. The federal police assigned to Lula are warning of a grave threat of political violence ahead of Sunday’s first round of the presidential election.

In a classified memo obtained by Reuters, the federal police team warned that “The current scenario is unprecedented in the history of Brazilian democracy and increases the challenge of guaranteeing the physical safety of the candidate.”

The killing continues a growing pattern of Bolsonaro supporters targeting Lula supporters, which has left many Brazilians worried. From Reuters:

“Nearly 70% of Brazilians say they are scared of being physically assaulted because of their political or party preference, according to a Datafolha poll released this month.

‘I don’t wear red in public anymore,’ said Gabriel Oliveira, referring to the PT’s trademark color, at a recent Lula campaign event in the southern Bolsonaro stronghold of Florianopolis. ‘The people who support Bolsonaro are very aggressive.’ ”

Donate to Help Us Cover the Brazilian Presidential Elections Sunday

Tomorrow, I’ll fly out of D.C. to Rio De Janeiro. The first round of Brasil’s presidential election begins Sunday, and if Lula doesn’t get above 50%, which he is currently polling under, there will be a run-off election on October 28.

The next month will be very busy for me as I travel around Brasil, and reporting will take up all of my time. However, running Payday requires constant fundraising. But every donation we receive means I can focus on covering the election while maintaining our coverage of the U.S. labor movement.

Donate today to help us focus on reporting and not fundraising. Please, if you can, sign up as one of our 725 recurring donors today.

“This crisis has occurred as a result of antiquated sentencing laws that led to overcrowding, numerous deaths, severe physical injury, as well as mental anguish to incarcerated individuals,” organizers said in a letter of demands delivered to the Alabama Department of Correction by outside organizers on Monday. “This humanitarian crisis led to the Department of Justice filing suit against Kay Ivey and the ADOC. Yet, nothing has changed or gotten better, only worse.”

For more on the strike, check out Alabama Political Reporter.

Finally, last week, Payday reported on The New York Times reporters’ increasing calls for a strike as they remain frustrated with the year-and-half long bargaining process. Now, reporters are escalating tactics and putting increasing pressure on their frontline editors to stand up for them in the bargaining process.

“We’ve been at the table for a year and a half. And it doesn’t work, it hasn’t worked, so now we’re at the stage of saying we are going to drag our editors into this,” finance reporter Stacey Cowley told Vanity Fair.

For more, check out Vanity Fair.

Alright, folks, that’s all for today. I am flying out to Brasil on Wednesday to cover the election on Sunday.

To help us cover this crucial presidential election in Brasil, we need your help. Chip in today, or sign up as one of our 725 recurring donors.