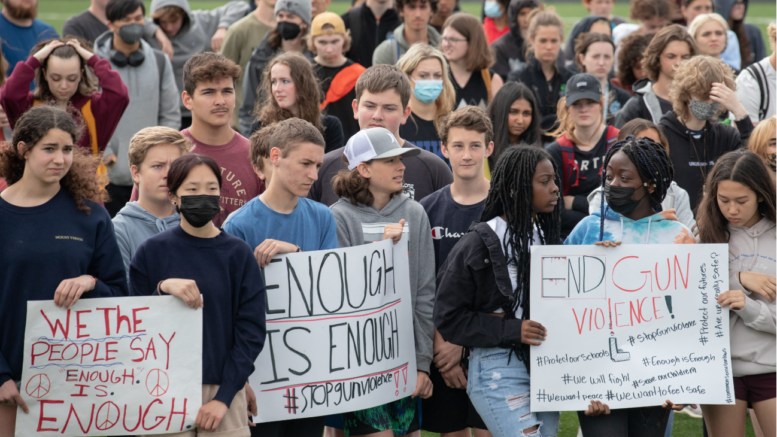 Folks, Greetings from the Burgh, where thanks to your support, my iPhone is working once again. Thanks for all your donations.

Over 200 Walkouts at Schools Over Gun Control Nationwide

There have been dozens of reports of students and teachers across the nation walking out over gun control this week. This could be the beginning of a new trend of teachers walking out nationwide.

Much like the Black Lives Matter protests following George Floyd’s death, which inspired over 500 walkouts in the month following his death, Payday Report believes that growing momentum among students as well as teachers for gun control could lead to even more protests.

Yesterday, groups responding to an online call for action walked out at over 200 schools across the US, according to Everytown for Gun Safety.

“I think there is something so devastating about 10-year-olds being killed, and students across the country are realizing this could have been any of us,” Maddie Ahmadi, 17, a junior at Essex High School in Essex Junction, Vermont told NBC News.

For more, check out NBC News

For years, the labor movement has been hesitant to address the issue of gun control. However, unions like AFT, NEA, ATU, and now UFCW have increasingly called for gun control as their members are targeted by gun violence.

Donate to Help Us Cover How Labor Could Fight Back Against Guns. Please, if you can, sign up as one of our 691 recurring donors.

Yesterday, Payday Report wrote about how Apple was trying to fight a growing union movement in its stores, which saw four union drives launched in the last two months. In response, Apple has raised retail workers’ wages to $22/hour, while unions have accused the company of illegally intimidating pro-union workers.

Now, the Communication Workers of America (CWA) has decided not to go forward with a union election of 100 workers in Atlanta citing intimidation by the company.

“Apple has conducted a systematic, sophisticated campaign to intimidate them and interfere with their right to form a union,” the CWA said in a statement to Bloomberg.

“It’s time for those in charge to take this crisis seriously,” Stephanie Stark, a senior mental health coordinator at Allina Health told St Paul Union Advocate. “This work is too important to be ignored and undervalued.”

For more, check out the St Paul Advocate

Finally, Association of Flight Attendants union President Sara Nelson has earned accolades for being a progressive champion. However, in recent months, she faced criticism from progressive activists for backing reactionary positions.

Last month, Sara Nelson faced criticism for defending the refusal of her union to take a position on the dropping of the mask mandate on airlines. Disability advocates criticized Nelson at length for not taking a position on the matter.

Last week, Nelson praised the merger of Spirit and Frontier Airlines, which would create the fifth largest airline in the US, and said that her union would support it.

​​“We support the necessary regulatory approvals that will improve competition, increase consumer options and experience, and maintain and grow good union jobs,” Nelson said in an announcement.

The move faced criticism from many progressive groups.

“In an industry already infamous for anticompetitive behavior and collusion, a Frontier-Spirit merger will raise prices for consumers, drive job cuts, encourage service reductions, and enable more airline market power abuse,” said Shahid Naeem, a Policy Analyst at the American Economic Liberties Project in a statement. “While allowing another airline mega-merger may benefit shareholders, executives, and their bankers, all evidence shows that it will be a raw deal for American travelers, citizens, and workers. If Frontier and Spirit want a stronger market share, they should offer a better product — not ask the government to hand it to them.”

For more on problems with the Spirit-Frontier merger, check out American Economic Liberties Project

Donate to help us cover how union activists are fighting back against guns. And please if you can, sign up as one of our 691 recurring donors today.

Keep us informed of how local labor activists are responding to gun violence. Email me at [email protected]

Alright, that’s it for today as I am very sick. Thanks again for all of the support.